The movie Rocky captures the spirit of a lone fighter with the odds stacked against him who prevails in the end. What's interesting about this film is that the same caliber of courage depicted by Rocky is what it took to actually make the movie. 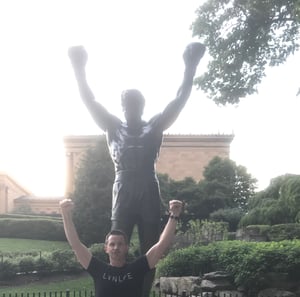 Sylvester Stallone was a down-on-his-luck actor who couldn't get much of a break in New York City in the early 70's. So he moved to Los Angeles. He struggled so much that he ended up selling his beloved dog, Butkus, for $25.

But then something happened that gave him an idea that changed everything. Here's how Stallone put it, "I went out to see Muhammad Ali fight Chuck Wepner. And what I saw was pretty extraordinary. I saw a man called 'The Bayonne Bleeder' fight the greatest fighter who ever lived. And for one brief moment, this supposed stumblebum turned out to be magnificent. And he lasted and knocked the champ down. I thought if this isn’t a metaphor for life.”

With this real-life fight as his inspiration he wrote the script for Rocky. He ran the script by some producers and they loved it. The only problem was that he wanted to play the lead role of Rocky and they wanted to get someone famous to play the role. They offered him $360,000 for the script on the one condition that someone else would play the part of Rocky.

Imagine how tempting that would be? I mean he was so broke he had sold his dog for $25! But Stallone stood firm and said "no." Why? Because he had a clear vision that he refused to compromise!

The producers finally relented and let him play the lead role. But they only gave him $1,000,000 dollars to make the entire movie. Even in the 1970's that was a paltry amount for a serious movie to be made well.

So what did Stallone do? He used a lot of family and friends both in front of and behind the camera. He did most of the shots in the movie in just one take. He improvised, adapted and overcame to accomplish his vision!

What was the result of his tenacious and uncompromising vision? Rocky won the Oscar for Best Picture in 1976! According to Forbes the Rocky franchise has brought in over 1.4 billion dollars and is one of the most successful movie franchises of all time!

By the way, after he signed the deal for Rocky, Stallone found the guy he sold his dog to and bought Butkus back (for $15,000!) And, yes, this is the same dog that is in the movie!

What does all of this Rocky talk have to do with youth leaders? Like Sylvester Stallone, we need an unstoppable vision burning in our hearts that we will never give up on!

If you don't yet have a vision burning in your heart let me propose one you can seize as your own: "Every teen everywhere hearing the Gospel from a friend!"

Dare 2 Share Live could be a great citywide outreach for your church this Fall! Why not jump on board with it so that every teen everywhere in your city can hear the Gospel from a friend?

Our theme this year is #Fight2Win based on Ephesians 6:10-12! Your teenagers will be equipped to fight against someone way more formidable than Apollo Creed and win something way more valuable than the Heavyweight Belt!