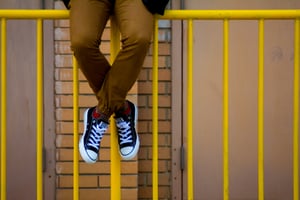 Traditionally, most Christian schools (in my opinion) tend to produce little legalists or hell-bent hedonists. Students either buy off on the rules of said Christian school (and begin to gauge their spirituality by adherence to the list of do's and don'ts) or they rebel against the list and, often times, the Lord.

I experienced this personally in the small Christian high school I graduated from in the 1980's.

My school had a lot of rules that the students were expected to keep. The guys had to have their hair super short and the girls had to have their dresses super long. Even the cheerleaders had full length skirts (but the weird double-standard was that the guys on the basketball team wore shorts that were so short they would make George Michael of Wham! fame blush.)

While these words were never said out loud it felt like they were constantly being preached, "If you keep our rules, read daily from the King James version of the Bible, memorize verses of Scripture word for word (as well as the verse references), go to church every time the doors are open, don't have sex before you're married and share Christ at least once a week then you'll be holy...like us."

I kept the rules, memorized the verses, shared the Gospel weekly, was there every time the doors were open, and just said "no" to drugs, drink and sex. My ability to adhere to  the list was how I gauged my spirituality.

Down deep inside I had turned into a little legalist.

This legalism led to a consistent struggle with pride and lust in the deep dark crevices of my soul. It was a constant battle with the flesh, fueled by the aphrodisiac of legalism. As Colossians 2:23 reminds us, "Such regulations indeed have an appearance of wisdom...but they lack any value in restraining sensual indulgence."

And many of my fellow Christian schoolmates didn't even try to fake a facade. They just gave into the flesh. They cut sail and turned into hedonists. They mocked the rules. They drank and partied. They rebelled against the list as well as the Lord.

Not much has changed since the 80's. I still believe that, for the most part, Christian schools tend to produce legalists or hedonists.

But there is a 3rd option. Christian schools, if they changed their paradigm, could produce Spirit-fueled, Gospel activists.

This Gospel activism gave me a purpose that transcended the list. It gave me a goal, a mission and a vision to carry out the last and lasting mandate of Jesus to make disciples (Matthew 29:19,20.)

The year after graduating from high school I finally discovered that the same Gospel that saves the lost also sanctifies the believer. I began to re-discover this good news of God's grace for myself. This Gospel was not just for the unbeliever, but for the believer. It was not just to save the lost from hell but to save us, as believers, from both legalism and hedonism.

My Christian school had activated me with a Gospel mission but not a grace mindset. I thank God that he revealed to me the freedom of walking by faith and being fueled by grace during my Freshman year of college.

I am convinced that Christian schools who activate their students with a Gospel mission  and a grace mindset can produce activists who, not only own their faith, but share their faith.

Call it Gospelizing your Christian school if you will.

Last year the Christian school where my kids go, Faith Christian Academy, took some steps to Gospelize our school. They purchased my book, Gospelize your Youth Ministry for all 100+ of their teachers and leaders. They brought me in to train all of these teachers in the 7 values of a Gospel Advancing Ministry.

The leadership at Faith Christian is considering taking even more decisive steps this year to accelerate the Gospel mission and grace mindset in and through their students this upcoming school year. Pray for them as they do. I believe that, if, through the power of God's Spirit, they can do this, they will produce graduates who live their faith long-term and share their faith consistently.

I also believe that the steps they are taking could create a new template for Christian schools, one that produces far more activists, than legalists or hedonists.

If you are a teacher or leader at a Christian school and would like a free digital copy of my book Gospelize your Youth Ministry (which could just as easily be titled, "Gospelize Your Christian School", then click here.