But I am convinced that attendance numbers may be among the weaker measures of youth group strength. Those who gauge youth ministry size and youth ministry strength often make the wrong assumption that, just because teens are showing up, they are leading a healthy youth ministry. But people show up at car wrecks, fist fights and circuses too. 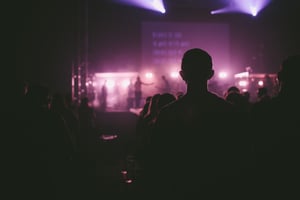 If you imagine Jesus as the ultimate youth leader (because the majority of the disciples were most likely teenagers), you can clearly see he had a different philosophy of youth ministry strength. Think of the crowds that followed Jesus as those who show up in a typical youth group meeting and think of his disciples as his student leadership team. When you begin to read the Gospels through these lenses, it becomes obvious that Jesus didn't gauge his impact by attendance at all.

As a matter of fact there are several times he seems to try to get rid of the crowds so that he could invest in his leadership team. Luke 15:25-27 is a powerful example of this, "Large crowds were traveling with Jesus, and turning to them he said:  'If anyone comes to me and does not hate father and mother, wife and children, brothers and sisters—yes, even their own life—such a person cannot be my disciple. And whoever does not carry their cross and follow me cannot be my disciple.'"

Getting on Team Jesus is free because Jesus paid all the dues. Getting on the starting team will cost you everything you have. And Jesus was looking for starters. He called out the crowd and challenged them, not to just be believers, but all-in, on-fire, sold-out fanatics.

Now, I'm not saying that you should cancel Wednesday night youth group meetings. But what about using it as a way to identify attending teenagers who could be a part of your all-in, on-fire, sold-out crew of student leaders...just like the early disciples?

Jesus ministered to the crowds but he poured his life into the disciples. Long after the crowds had gone home, he was investing in his student leaders. And by the way, it wasn't just 12 guys who were his disciples. Both male and female followed him. According to Luke 8:1-3, "After this, Jesus traveled about from one town and village to another, proclaiming the good news of the kingdom of God. The Twelve were with him,  and also some women who had been cured of evil spirits and diseases: Mary (called Magdalene) from whom seven demons had come out;  Joanna the wife of Chuza, the manager of Herod’s household; Susanna; and many others. These women were helping to support them out of their own means."

And the numbers of his student leadership team weren't always small. At one point his leader numbers blew up to at least 72! In Luke 10 we read, "After this the Lord appointed seventy-two others and sent them two by two ahead of him to every town and place where he was about to go. He told them, 'The harvest is plentiful, but the workers are few. Ask the Lord of the harvest, therefore, to send out workers into his harvest field.'"

Yes, thousands upon thousands of people had been impacted by his ministry, but it was the strength of this crew of student and adult leaders by which Jesus gauged his effectiveness. Life-of-Jesus guru Dr. Dann Spader makes the powerful point that this is exactly what Jesus was referring to in John 17:4 when he prayed, "I have brought you glory on earth by finishing the work you gave me to do."

His last words to his leadership team are found in Acts 1:8, "But you will receive power when the Holy Spirit comes on you; and you will be my witnesses in Jerusalem, and in all Judea and Samaria, and to the ends of the earth.'" After saying this, he ascended into heaven.

They were to carry on the work of being witnesses and making disciples when Jesus was no longer around. We must do the same!

But how do you start identifying and equipping student leaders? This process is long and hard...but necessary. It took Jesus 3 1/2 years!

To get started in this journey why not consider taking your willing-to-follow-Jesus teenagers to Lead THE Cause? This full-week, highly intensive, hands-on student leadership training is tailor made to build student leaders who live and lead the way when it comes to making disciples!

This summer it will be in Denver, DC, Austin, Chicago and Orange County, California. It's more boot camp than camp. Yes, it's fun. Yes, it's hard. Yes, it's super rewarding. By God's grace, it's the best thing we do at Dare 2 Share. And it will help you build and strengthen your student leadership team to be all that it can and should be.

Our theme this year is "Follow" based on the life and ministry of Jesus. Check out the video and then find out more on leadthecause.org.

Topics: Lead THE Cause