Refuse to lose your Gospel urgency!

As I type these words I'm sitting in front of The Old Water Tower on 800 N Michigan Avenue in downtown Chicago. I'm getting ready to do Lead THE Cause, a training event that will inspire, equip and unleash over 500 teenagers to share the Gospel with their lives and their lips. 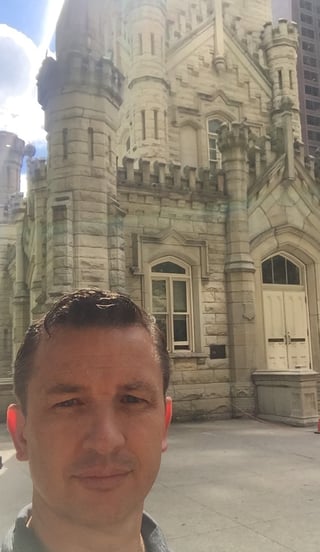 As I gaze upon this old building I can't help but remember the fact that it was one of the few surviving structures of what is now known as The Great Chicago Fire of October 8, 1871. This fire rapidly ravaged downtown Chicago which, at the time, had an overabundance of wooden structures packed and stacked in the heart of the city.

On that tragic night some 300 people died, roughly 3.3 square miles of the city was destroyed and more than 100,000 residents were left homeless.

D.L. Moody was right there when it happened.

The greatest evangelist in the history of Chicago had travelled one million miles (long before airplanes and fast trains) and preached the Gospel to one hundred million people (long before voice amplification.) But this fateful night he happened to be back in his beloved Chicago, preaching to the largest crowd he had ever addressed.

His text that evening was Matthew 27:22, “What shall I do then with Jesus which is called Christ?” That night he preached with power and intensity. But it all was a set up for the next week, the finale of his sermon series where he would call his audience to believe in Jesus.

At the conclusion of his sermon he said, “I wish you would take this text home with you and turn it over in your minds during  the week, and next Sabbath we will come to Calvary and the Cross, and we will decide  what to do with Jesus of Nazareth.”

With those concluding remartks his song leader, Ira D. Sankey (whose hymns are sprinkled throughout most evangelical hymnbooks) began to lead in singing the hymn,

The storm of justice falls,

And death is nigh.

But Sankey never finished the hymn. He later said,

“My voice was drowned by the loud noise of fire engines rushing past the hall and the toll of bells, among which we could hear the deep sullen tones of the great city bell, in the steeple of the old courthouse close at hand, ringing out an alarm…Tremendous confusion was heard in the street and Mr. Moody decided to close the meeting at once for the audience was becoming restless and alarmed.”

To his dying day, Mr. Moody deeply regretted that he had told that congregation to come next Sabbath and decide what to do with Jesus.

“I have never since dared,” he said, “to give an audience a week to think of their salvation. If they were lost they might rise up in judgment against me. I have never seen that congregation since. I will never meet those people until I meet them in another world. But I want to tell you of one lesson that I learned that night which I have never forgotten, and that is, when I preach, to press Christ upon the people then and there and try to bring them to a decision on the spot. I would rather have that right hand cut off than to give an audience a week now to decide what to do with Jesus.”

That night Gospel urgency re-ignited in Mr. Moody's already on-fire soul with even more consuming intensity. He never again preached to a crowd without giving the Gospel clearly and challenging the audience to put their faith in Jesus right then and there.

What's it going to take for you to get your Gospel urgency back?

-The suicide of that teenager you know who is struggling with depression?

-The unexpected death of neighbor in a tragic car accident?

-The sudden diagnosis of cancer in your body or a family member's?

Don't wait for tragedy to strike. Live in Gospel urgency now by choice and share the message of Jesus with friends, family, co-workers, neighbors and classmates before it's too late.

If you think about it, there is another fire burning. This fire burns hotter and longer than any fire kindled here on earth.

It's the fire of hell.

Jesus made it clear again and again and again that those  who have not put their faith in him will experience this fire for eternity. Jesus himself said these words in John 3:17,18, "For God did not send his Son into the world to condemn the world, but to save the world through him. Whoever believes in him is not condemned, but whoever does not believe stands condemned already because they have not believed in the name of God’s one and only Son."

If you're not a believer in Jesus I challenge you, from the front of The Old Water Tower in Chicago, Illinois, to drink of Jesus, the Living Water! If you are a believer I challenge you to share his message of hope and deliverance to the one person God is placing on your heart right now!