Get buff! Get tough! Get out! (Joseph's 3 keys to sexual purity) 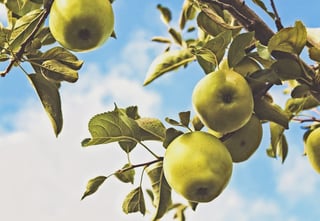 "Now Joseph was well-built and handsome, and after a while his master’s wife took notice of Joseph and said, 'Come to bed with me!'  But he refused."  Genesis 39:7,8

When Joseph was sold into slavery as a 17 year old teenager he had no idea what awaited him. Sure he would serve time as a slave and as a prisoner but he would also be relentlessly tempted by a beautiful older woman who wanted to have sex with him.

Joseph just said no...again and again. And his refusals would eventually lead to a chain of events that would save his family, the future nation of Israel, from starvation.

Joseph's three keys can help keep both us and our teenagers pure from sexual sin:

From the Genesis account we know that "Joseph was well-built and handsome!" He was the type of guy who's abs got noticed on the beach and would win most arm wrestling contests. Put simply, he was ripped.

But this is not the kind of "buff" I'm talking about. As physically fit as Joseph was, he was even more spiritually fit. We know from verses like Genesis 39:2 that, "The Lord was with Joseph so that he prospered...."

This assumes that Joseph was spending time in prayer, reflecting on God's promises, aligning his life with God's will and doing what he was doing for God's glory. In other words Joseph was living a spiritually fit life. He's even mentioned in Hebrews 11:22 as one of those Old Testament heroes who was characterized by a life of strong and unshakeable faith.

If our teenagers are to be sexually pure it starts with a spiritual regimen of time in the Word, prayer and a daily declaration of dependence on the Holy Spirit. Without this they don't stand a chance against the temptations that come at them every day through their cell phone screens and relationships with the opposite (or even same sex) that may be tempting them to cross a line.

We must help them get buff.

"Now Joseph was well-built and handsome, and after a while his master’s wife took notice of Joseph and said, 'Come to bed with me!' But he refused. 'With me in charge,' he told her, 'my master does not concern himself with anything in the house; everything he owns he has entrusted to my care. No one is greater in this house than I am. My master has withheld nothing from me except you, because you are his wife. How then could I do such a wicked thing and sin against God?'  And though she spoke to Joseph day after day, he refused to go to bed with her or even be with her."  Genesis 39:6-10

Joseph had to take measures to keep away from Potiphar's seductress wife. He started by saying "no" day after day whenever she tempted him. But he finally had to just avoid her completely. Although she was the lady of the house, he was in charge of keeping in order. So he made sure that, as often as humanly possible, he steered clear of her tempting ways.

For teenagers, this may mean choosing not to be with a certain person alone. It may also mean not sleeping in the same room with their cell phones or computers. This may mean there are certain social media platforms/websites that they must completely avoid because of the inherent temptations.

Whatever this means for your teenagers make sure you challenge them to "get tough" and not allow themselves to be put in a place where temptation can easily be given into.

"One day he went into the house to attend to his duties, and none of the household servants was inside. She caught him by his cloak and said, 'Come to bed with me!' But he left his cloak in her hand and ran out of the house."  Genesis 39:11,12

You've heard the statement, "When the going gets tough, the tough get going." Sometimes the tough should get going right out the door. When temptation strikes and is too hot to handle (I'm sure Potiphar's wife was drop dead gorgeous and there was nobody else in the house but her and him) we should do what Joseph did and RUN!!!

Some say running away is the coward's response but in this case it's the response of the courageous. Joseph knew that he had a sinful nature that, combined with the hormones of a teenaged boy, could be a pending and powerful cocktail of compromise. So, instead of trying to fight it off he ran it off...the Old Testament version of a cold shower.

We need to teach our teenagers (and remind ourselves) that there is a time to run. When things get too tempting we must lace up our shoes and race out the doors. On second thought leave the shoes behind and just run!

Joseph is a powerful example of how to win against the sin of sexual compromise. He stayed pure and God used him in a powerful way to save a nation (his brothers) from obliteration.

But as great of an example as Joseph was, Jesus is even better! Not only did Jesus resist the biggest temptations ever given in the history of humanity (Matthew 4:1-11) he was crucified in our place for our sins to destroy the power of sin once and for all (Romans 6:6.) Now Jesus makes that power to live victorious lives over those sins through his indwelling Spirit (Romans 8:13.)

If you've fallen sexually confess it and forsake it and then move on to a life of purity. Remember the promise of God in 1 John 1:9, "If we confess our sins, he is faithful and just and will forgive us our sins and purify us from all unrighteousness."