Evangelizing Now and Then

When it comes to sharing the Gospel we have a motivation problem. Some Christians excuse their apathy by saying things like, "Well, that's the pastor's job" or "Evangelism is not my spiritual gift." Others think to themselves, "God is in charge of that stuff anyway. I can't save anyone."

But, down deep inside, we all know that we should be sharing the Gospel with those around us who don't know Jesus. We feel the white hot conviction that emanates off of passages like Matthew 28:19 when Jesus gave his followers the charge to "go and make disciples of all nations...." 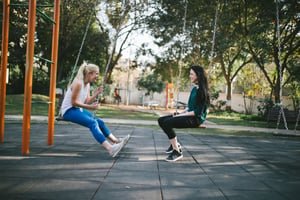 So, other than the obvious command of Jesus, why should we share the Gospel? What's the urgency? What's the need?

I propose these two motivations as paramount: Now and Then.

Sure, this is a statement we use in everyday conversations. We say things like, "I go to the movies now and then" or "Every now and then we like to eat out as a family."

But, taken in the context of evangelism, the two words "now" and "then" can provide different, but equally powerful motivations to share the Gospel.

How do people make it in this life without Jesus? Where do they find strength to live through their "now"?  In Matthew 9:36 this is what seemed to motivate Jesus in that moment. This verse tells us, "When he saw the crowds, he had compassion on them, because they were harassed and helpless, like sheep without a shepherd."

In this culture if you saw sheep without a shepherd you were witnessing a disaster waiting to happen. These sheep would soon be stolen by some thief or killed by some predator.

Jesus saw their now and his heart was broken. The text says that he had compassion on them. The word compassion means, "to suffer with." He hurt for their present condition. He saw past their cheap facades deep into the abyss of their souls and his heart ached for them. He felt their pain.

In the same way we need to have compassion for those around us right now. Down deep inside their souls there is a dark hole that they're seeking to fill with money or family or work or sports or drinking or sex or whatever but, ultimately, it is a bottomless pit that could never be filled by the things of this world.

We must see them in the now and be brokenhearted for them. We must ask God for the power to, like Jesus, feel their pain. The "now" motivation for evangelism is powerful and deeply emotional.

There is a day, that great and terrible then, when everyone who ever lived who never put their faith in Jesus, will stand and give an account before his great white throne. On that day they will be judged, found guilty of rejecting the Gospel (John 3:18) and thrown into the lake of fire where they will suffer forever and ever (2 Thessalonians 1:8,9.)

As difficult as it is to imagine, think of your friend (or family member or classmate or coworker) standing there on that day. What would your friend say to you if they could? What would they say if they discovered you knew the Gospel and never told them?

May these twin motivations inspire you to share your faith, not just now and then, but always.