"You lied to me!"...A Christmas Confession 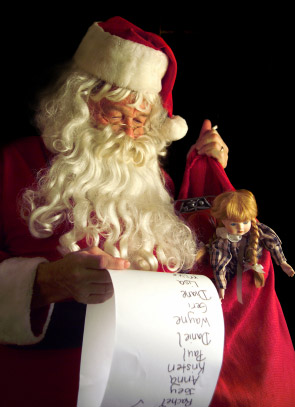 "It was the week before Christmas and all through the house.
Not a creature was stirring except for me and my spouse."

Why were we stirring? Because I had just told my eight year old daughter the truth about Santa. The results were dramatic, traumatic and tear-filled.

Now, technically, we never told her that Santa was real and we always emphasized that the true meaning of Christmas was the Son of God being born into this world. Like the little drummer boy we pounded home the real Christmas story consistently and emphatically. Santa was just a fun, little side story...the myth of which we didn't perpetuate or correct.

To all who are clucking your tongues at me right now just know that I was raised in a super conservative church where the pastor literally sang this to us kids at Christmas time, "You better watch out. You better not cry. You better not pout. I'm telling you why, Santa Claus is dead."

Seriously, he sang that to us!

Call me a heretic but I didn't want to totally stamp out the myth of Santa for my kids, like it was boot-stomped out for me. Nor did I want to make it all about Santa (or even mostly about him.) The clause in my Santa Claus philosophy was that, as long as I kept him as a Christmas side dish and not the main entree, that everything would be fine. I figured that my little Kailey, like my son Jeremy, would figure it out on her own. But then last week happened and my theories got shot down like a flying sled trying to make it through North Korean airspace.

Kailey asked me if Santa was real. I told her to come sit on my lap. The conversation went something like this:

"Do you want to know the truth?" I asked her.

"Yes" she said with a great, big Kailey smile.

I'm thinking to myself, "You can't handle the truth" but I ask again, "Are you sure?"

"Yes daddy!" was her joyful response.

She interrupted with, "What's a legend daddy?"

"It's a made up story that..." But, before I could finish, she interrupted me again.

"You lied to me! You lied to me! Who ate the cookies? Who drank the milk? Who wrote the note from Santa?" She cried with the accusatory power of a prosecuting attorney.

And it all went downhill from there. My wife had to take over as I blurted words like "legend" and "Christmas fun" and "real meaning" and then slunk away into tinsel covered humiliation.

Twenty four hours later Kailey had fully recovered. But as we drove in the car a few days later that classic Christmas song came on the radio, "You better watch out. You better not cry. You better not pout. I'm telling you why. Santa Claus is..."

"dead" Kailey said over the music.