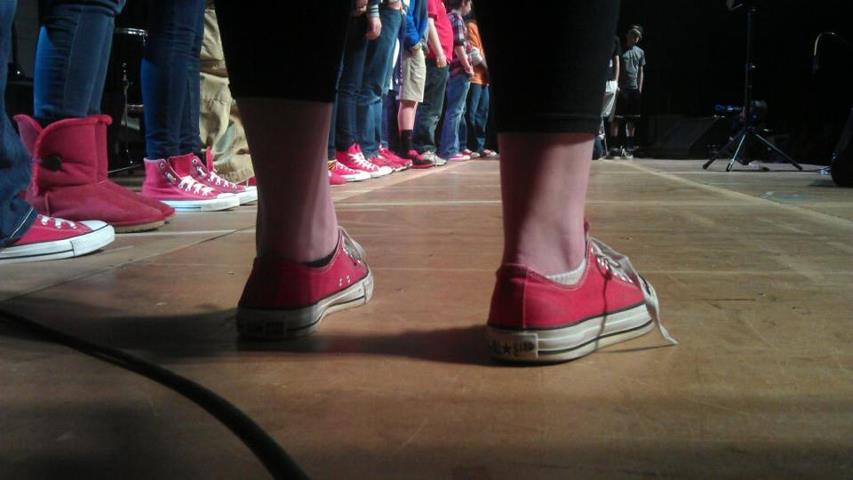 This amazing blog post is from a teenager named Caleb who went to the Dare 2 Share conference in Chicago. I hope you are as impacted by it as I was.

"Last weekend I went to Dare2Share's Follow Tour conference, along with dozens of other teens from our church. It was an amazing experience, as Dare2Share always is, but this year, is was different for me. I have my struggles, and at that point in my life they seemed like they would overwhelm me. I absently noticed that the logo for the Follow Tour was a pair of red shoes, with the words 'all in' written on them. Cool, I thought to myself. That makes sense. Little did I know that those two words--and those red shoes, would make a world of difference.

We arrived at the Sears Centre in Chicago more or less safely, and after putting on the bracelets that would stop security from tackling us when we tried to walk in, made our way inside to join thousands of other teenagers in worship. If you've ever been to a conference like this, you know what I'm talking about. The experience was incredible--thousands of voices singing together as one, all to Jesus.

As I stood there, worshipping, something distracted me. I had been wrestling with myself for the past week, trying to decide if I was doing these things for the right reasons. If I was being a Christian, worshipping, serving, not because my parents did it, or because my friends did it, but because I believed that Jesus had done what the Bible said He had done. I didn't want to be singing to God because it was what everyone else was doing, I wanted to make sure that I was doing it because of what God had done for me.

The conference continued, and I struggled with that. Now, I grew up in a Christian home, as a pastor's kid, surrounded from birth with the Bible and Jesus. I learned many different things about how to defend my faith, how to win others to Christ, and how to serve God and others.

But was it really my own? Did I own my faith? I asked myself those questions last weekend, and luckily I found an answer.

It was nearing the end of the conference, and Greg Stier, the founder of Dare2Share, finished with a message that impacted me tremendously. He began to talk about what the words, 'all in', really meant, and I found out the significance of the pair of red shoes that was the logo for the tour.

You see, Jesus went all in for us. He became human, humbling himself and walking among us. He put on his own footwear, a pair of dirty sandals, and did as we did. He felt what we felt, he hurt as we have hurt. And finally, after a long, brutal walk, which smeared his sandals with blood and dirt, He died for us.

Greg Stier called a kid up from the audience to come on stage. He asked the kid to take his shoes off, and to sit on a chair that had been set there for him. "You represent everyone here," Greg said, pulling out a pair of red shoes with the words, "all in", written on them--identical to those on the logo. "In a moment," Greg continued. "I'm going to ask you to put these on, but first--" he looked out over the crowd. "--I want to ask everyone with red shoes to come up here on stage."

As you all can probably see, I'm wearing red shoes right now. And I was wearing these at the conference too. For a moment, I couldn't believe it. I was like, 'that's me!' I looked around at my friends, saying, 'I have red shoes on!'

Finally, one of them looked at me and said, 'Go!'

So off I went.

I will always remember being surrounded by hundreds of others, all wearing red shoes, as we stood around or on the stage, watching as Greg turned back to the kid sitting in the chair.

'You represent everyone here,' the speaker said. 'Are you willing to put these red shoes on, and go all in for Jesus?'

I wanted to scream YES! Luckily, I didn't.

Greg put the shoes on him.

It all made sense. My faith was my own. It wasn't my parents' faith. It wasn't my friends' faith. God spoke to me that night in Chicago, and he asked me a simple question. "Are you all in? Are you ready to stop playing at your Christianity, and start to live?"

Yes, I answered silently as the worship band came on stage to finish out the conference with a final song. Then we worshipped.

I will always remember being surrounded by hundreds of others in red shoes, worshipping the Lord.

So I ask you, are you all in? Christ died for you. Are you going to live for Him?"

You can view Caleb's original blog here. I deeply appreciate him and his parents allowing me to put his excellent post on my blog.

Pray with me for the tens of thousands of teens, like Caleb, who made the decision to go "all in" during the Follow tour. Pray that God continues to give them the strength, wisdom and boldness to follow in the steps of Jesus and reach their friends with the good news.