I was the dirty, little family secret 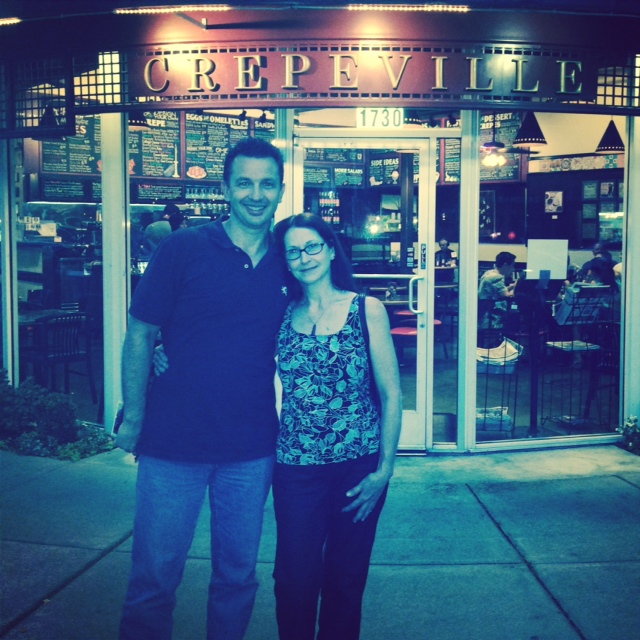 Two days before I was slated to fly into Youth Specialties Sacramento eight years ago I received the weirdest e-mail I have ever received. It went something like, "Is your dad Toney Woods? If so I think I may be your sister!"

I remembered the strange spelling of my biological father's name from the birth certificate. You see I had never met Toney. He and my mom had a very short term relationship. As a result she got pregnant. When he found out he got transfered (he was in the Army.)

Up until I was twelve years old I thought my brother and I had the same dad. It was weird to me that my brother's dad, George Stier, only called once in a great while and when he did he always wanted to speak to my brother Doug, never me.

Finally I asked my mom about it. She turned pale and admitted to me that Doug's dad and my dad were two different men. Soon after she took me to meet Tess, Toney's sister, who lived in Denver at the time. Tess was actually the one who introduced Toney to my mom at a party 12 months and 9 months earlier.

Tess told me that Toney was a preacher in his early years before he joined the army and eventually became a Sergeant Major while in the army. I also discovered he had become a highly decorated soldier after fighting in the Korean War. He was the very last Prisoner of War released by the North Koreans, long after the war was over. When he came back to the states his spiritual life trended in a different direction, away from God. He eventually met my mom. They partied. She got pregnant. He found out and left Denver then died a few years later.

Tess told me a lot that night. But Tess never told me I had siblings on my father’s side. She never told me that I had an entire family in Northern California who knew nothing about me. Tess was the gatekeeper who swore herself to silence about me, the dirty, little family secret.

For 29 years I heard nothing else from Tess.

But then 8 years ago Tess spilled the beans about the illegitimate boy in Denver who was Toney's biological son. And soon after I received that strange e-mail from a lady named Marilyn who claimed to be my sister. When I asked her via e-mail where she lived she responded “Sacramento.”

That’s when I knew that there was something divine about this encounter. I received the e-mail two days before I was slated to fly into Sacramento for the first time in my life to speak at a youth workers' convention.

I’ll never forget that night when Marilyn, Toney Jr, Tess and Marilyn’s mom walked into the hotel lobby at the Hyatt. We had dinner and there was an immediate connection. It was obvious to me that Marilyn was my sister. We had the same spastic sense of humor and twitchiness. It’s like we had known each other all of our lives.

For hours that night we laughed, told stories and shared family histories. Marilyn’s mom was quiet most of that night. I found out later on that, at first, she didn’t believe that Toney had sired a son that nobody but Tess knew anything about.

But, at the end of the night when we all stood up to say our goodbyes, she pulled me aside and confided, “I didn’t believe that you were Toney’s son at first. I found it hard to believe that Toney would do something like that. But, after listening to you and watching you tonight, I know that you are his son.” Then she went on to say that although Toney was a hero on the battlefield that he struggled in life. I’ll never forget what she said next. It was burnt into my soul like a white-hot branding iron, “My prayer for you in that you are a hero on the battlefield of your ministry as well as a hero in your personal life and marriage.” We then both broke down and wept, hugging each other for what seemed like a long time.

You have to realize the power in this moment. In a very real sense, my mom was the other woman and I was the dirty family secret that had been hidden in Tess’ heart for decades. But the blood of Jesus covers a multitude of sins. The Woods family, my other family, were believers in Jesus. Their love for Jesus made reconciliation with the painful reality of Toney’s past forgivable and their unblinking acceptance of me possible.

It was almost like a Hallmark movie was being filmed at the Hyatt that night. It was a moment of beauty that only a divine director could coordinate.

And just this past Saturday night I was at Youth Specialties in Sacramento again. This time it was just Marilyn and me who had dinner together. We shared stories and found out even more about each other, our pasts and our families. I even found out I have some Native American blood in me...pretty cool.

I also discovered that my grandfather was a genuine tent-preaching, whooping and hollerin', hell-fire and brimstone traveling evangelist (of the Pentecostal tradition.) This makes a lot of sense because, although I’m not technically “Pentecostal” I’ve been told that I preach like one on more than one occasion.

How about you? Do you have a sordid family history? Do you come from a broken family of dysfunction (I guess that since we all descend from Adam we all do!)? Just know that the power of reconciliation and restoration in our depraved bloodlines lies in the blood of Jesus.

Because of his shed blood we can make peace with our pasts and those who have hurt us. We can forgive the unforgivable because he forgave us. And, out of this broken mosaic, God can make something beautiful. That's his specialty.

"He has made everything beautiful in its time." Ecclesiastes 3:11