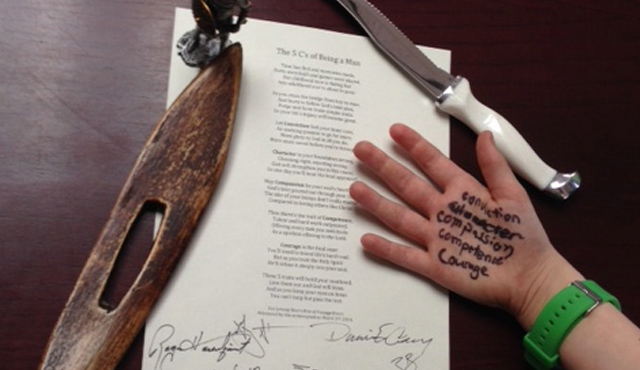 I know there are entire ministries dedicated to doing Rite of Passage events for boys turning to men. Although I'm not personally familiar with any of the ministries (and therefore can't recommend one specifically) I did attend one for a friend's son about a decade ago or so. I remember thinking to myself that this was something I wanted to do with my son when he turned 13 years old.

I thought that I'd put a quick little guide for those of you dads who want to do this type of an event for your sons. So below I've listed a few questions and answers to help spur your thinking on how to do it. I'm sure there are entire books on this which would be much more helpful but this should give you a start.

Why 13? That's the age that Jewish boys have their "Bar Mitzvah." This is one of the original R.O.P. events that marked a boy's entrance into manhood. When I shared this with my boy at the event he cracked us up by saying, "But dad, I'm not Jewish!" And he has a point. I chose to do it when he was 13. You may choose 16 or 15 or 12 or whatever you deem best for your son. There's no Bible verse that says you have to do one of these events, let alone at a certain age. But, for me and my boy, 13 felt right.

Why is an event like this helpful? In a culture where adolescence is being extended into the late twenties and early thirties for many young people it is important to create a catalytic event where they know they've crossed a threshold into adulthood. In cultures throughout history Rite of Passage events have been a part of bringing a sons from boys to men.

Even today in Africa Maasai warriors have a passage event which includes the men of the village surrounding and provoking a large male lion with spears. At just the right time the 13 year old boy rushes up to the roaring lion with a "lion spike" (a foot long spike carved from cow bone with a little slit that a 13 year old boy can fit his hand through.) The boy shoves the spike vertically into the open mouth of the lion. When the lion bites down on it he impales himself on it and is unable to close his mighty jaws. That's when they kill it.

While your Rite of Passage event may not include roaring beasts and lion spikes these kinds of examples help young men understand what is happening and how serious it is.

How do you conduct a R.O.P. event?

To be honest there are probably a thousand ways to conduct it. I've been thinking about this and planning this for months so here's how I did my son's:

This summer I bought a little knight statue when I was in a castle in Edinburgh, Scotland with my family. I was there on a preaching gig and we did some sight seeing after. After seeing tons of knights and weapons we went into the gift shop and I spotted a cool little five inch tall knife figure and bought it when my son wasn't looking.

My son loves knives so a few months ago I bought a top-of-the-line Kutco hunting knife for this event. I knew he would love this and it doesn't get much more manly than a large hunting knife. Well, except for the next gift.

Believe it or not I gave him a real lion spike! My friend, Doug Holliday, got me one when he was doing some ministry work in Africa.

At the end of the R.O.P. event I presented each of these gifts to my son with an explanation of each.

It was tough but Jeremy didn't know what was going on until we actually got to the location (we did at Dare 2 Share HQ) He thought it was some kind of crazy intervention or something at first and that was perfect. His initial nervousness added to the emotion of the event.

3. I invited five different men to speak about 5 different areas of manhood into his life.

I started out by talking for about five minutes on the importance of conviction in my son's life. Then I wrote the word "Conviction" in Sharpie on his palm. Then his best friend's dad talked on character and then signed and prayed. Next was his grandpa who took on compassion, his uncle Adam who talked about competence and finally Zane Black (one of my son's biggest role models) who talked about courage. We all shared verses and personal stories along the way.

Now Adam couldn't be there so he sent his son Zak as his proxy and video taped the message below:

I showed the video from my iPhone and then Zak prayed over Jeremy and wrote "Competence" on his palm in his dad's place.

Yeah I know that writing a poem isn't very manly but I did it anyway. I wrote it on the 5 C's of being a man. Here it is:

Time has fled and memories made,
Forts were built and games were played,
But childhood now is fading fast
Into adulthood you’re about to pass.

As you cross the bridge from boy to man,
And learn to follow God’s best plan,
Forge and form these simple traits
So your life’s legacy will become great.

Let Conviction fuel your inner core,
An undying passion to go for more,
More glory to God in all you do,
More souls saved before you’re through.

Character is your foundation strong,
Choosing right, rejecting wrong.
God will strengthen you in this cause,
So one day you’ll hear His loud applause!

May Compassion be your soul’s heartbeat,
God’s love poured out through your life.
The size of your biceps don’t really matter
Compared to loving others like Christ.

Then there’s the trait of Competence,
Talent and hard work outpoured,
Offering every task you seek to do
As a spotless offering to the Lord.

Courage is the final asset
You’ll need to travel life’s hard road.
But as you trust the Holy Spirit
He’ll infuse it deeply into your soul.

These 5 traits will build your manhood,
Live them out and God will bless.
And as you keep your eyes on Jesus
You can’t help but pass the test."

For Jeremy Stier’s Rite of Passage Event
Witnessed by the undersigned on March 2nd, 2014

All in all it took about an hour. My prayer is that this 60 minute ceremony is one that will mark my son forever.

Feel free to steal any ideas from what I listed above if you put together a R.O.P. event for your son. But put your own spin on it. Buy gifts and say things that fit his unique personality.

And pray for my son Jeremy as he launches into manhood! Pray that God uses him in mighty ways as he conforms him to the image of His own dear Son!