4 Things I LOVE about Creationfest 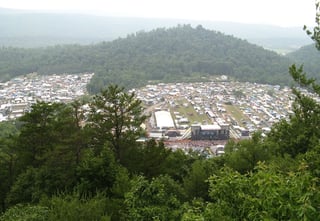 Since 1979 Pastor Harry Thomas has been leading and shepherding Creation Festival. Hundreds of thousands of young and old alike have been ministered to over the years by these highly produced, highly prayed-over, high quality events.

Here are four reasons I LOVE being a part of these amazing festivals:

Pastor Harry and crew know how to throw a party. There's tons of games, gimmicks and goofiness as well as TONS of great music! It's like a four day party without the hangovers and hooligans. The stage shows are top notch and the bands are the best of the best (or the soon to be the best!) From those selling hotdogs and funnel cakes to those eating them to those watching them eat them, everyone is having a blast...and, for whatever reason, I'm hungry again.

Overtly focused on worship and the Word

Ask an experienced evangelist about preaching at a typical Christian music festival and most will cringe a bit. No preacher I know likes to preach in ten minute segments in-between music sets. But Creation Festivals are a whole different animal. They make space for both worship and the Word! Preachers get between 30-40 minutes to unpack God's truth to God's people and the people stay tuned to hear it! Why? Because Pastor Harry has made it a HUGE priority!

I've never seen a festival (granted I haven't been to all of them) that is so committed to giving the preaching of God's Word equal footing with the music. It's like a tent revival with the best music and, excluding me, some of the best preachers in the nation!

Very committed to the Gospel

Last night I sat with Kevin, their "altar call/response" guy. He talked to me about the importance of giving the Gospel clearly and giving the audience a simple call to action. I knew right away this was my brother-from-another-mother because, I too despise manipulative altar calls and unclear Gospel presentations! I also hate it when preachers mix up salvation and sanctification in the altar call and people don't know why they are coming forward or feel like if they don't walk forward they are going to go to hell.

Creatonfest's follow up plan for new believers was impressive. It was simple, yet solid!

There were also at least three or four evangelism/discipleship apps being promoted (as well as the Life in 6 Words app which they encouraged me promote) to help attendees take the Gospel and the teaching beyond the event.

Everyone has a servant's heart.

There were no primadonnas on the team. From the volunteers at the gate waving you in to the young people working the Youth Leader oasis to the actual staff of Creation Festival there was nothing but humility and servanthood. That readiness-to-serve which defined Jesus defines them. It spills over to the artists and speakers who are so overwhelmed with the kindess of everyone that it can't help but flow in and through them as well. This is the same attitude that our volunteer teams at our Dare 2 Share events have so it felt like home!

If you've never been to a Creation Festival, I challenge you to check one out. They are great fun and you will walk away challenged to live and share your faith!