In youth ministry (or most any ministry for that matter) getting the right volunteers is key. In a low-funded, big-vision ministry world, getting the best volunteers to join you on your quest is absolutely non-negotiable. 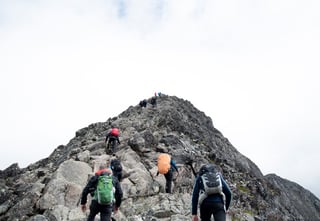 In a very real sense Jesus had to recruit volunteers to join him on his mission to "make disciples of all nations." To recruit the best ministry volunteers Jesus did three simple things...so can we!

"It was at this time that He went off to the mountain to pray, and He spent the whole night in prayer to God. And when day came, He called His disciples to Him and chose twelve of them, whom He also named as apostles."  Luke 6:12,13

The result was the choosing of the twelve disciples. And only one was a "bad" choice...humanly speaking. Divinely speaking, that bad choice was part of God's plan to accelerate Jesus toward the cross, the resurrection and the salvation of humanity.

"A large crowd was following Jesus. He turned around and said to them, 'If you want to be my disciple, you must, by comparison, hate everyone else—your father and mother, wife and children, brothers and sisters—yes, even your own life. Otherwise, you cannot be my disciple. And if you do not carry your own cross and follow me, you cannot be my disciple. But don’t begin until you count the cost. For who would begin construction of a building without first calculating the cost to see if there is enough money to finish it?  Otherwise, you might complete only the foundation before running out of money, and then everyone would laugh at you. They would say, ‘There’s the person who started that building and couldn’t afford to finish it!’ Or what king would go to war against another king without first sitting down with his counselors to discuss whether his army of 10,000 could defeat the 20,000 soldiers marching against him? And if he can’t, he will send a delegation to discuss terms of peace while the enemy is still far away. So you cannot become my disciple without giving up everything you own."  Luke 14:25-33

The ministry profile of what it would take to enter into a disciple/rabbi relationship with him was the result of relentless prayer. To get on "Team Jesus" was free (as Jesus makes clear over and over again in verses like John 3:16.) But to be a starter on Team Jesus would cost you everything. I'm sure many in the crowd turned back after hearing the list that Jesus had given them of what it would take to be on his starting team.

"Jesus called out to them, 'Come, follow me, and I will show you how to fish for people! 'And they left their nets at once and followed him." Matthew 4:19,20

It surprises a lot of people that this calling of Peter and his brother Andrew was not the first time they had encountered Jesus. By this time they had been with and around Jesus for about 12-18 months. The chronology of Jesus' ministry sometimes throws people off but suffice it to say that Jesus didn't just walk up to Peter and Andrew out of the blue and say, "Come follow me!"

No, he had gotten to know them and they had gotten to know him. They had seen several miracles and heard many teachings by the time he asked them to follow him. In a very real sense this was a persuasion process. After months of being around Jesus they knew he was the real deal and he knew they were sincere and serious...serious enough to make great disciples and eventual world changers.

In the same way, as we begin to pray for wisdom and build a ministry profile as to what the best volunteers look like in our particular ministry context, we can identify and get to know those we are praying about recruiting. And they can get to know us. At the right time we can have a conversation and gently persuade them to say "yes" to joining the volunteer team.

It's so important to get this right. Doing the youth ministry voluteeer "altar call" on Sunday morning can get you all the wrong kind of volunteers. Instead pray for God's wisdom and write a ministry profile of the characteristics of the ideal candidates (which should include a combination of spiritual hunger, true humility as well as a heart for teenagers and THE Cause of Christ.) Then set out to gently persuade these candidates to say "YES!" to being a volunteer in your youth ministry.

Nobody in history did a better job at recruiting the best volunteers than Jesus. Let's learn from him!

For more information on how to build a Jesus-centered, Gospel Advancing, disicple-multiplying ministry, click here.